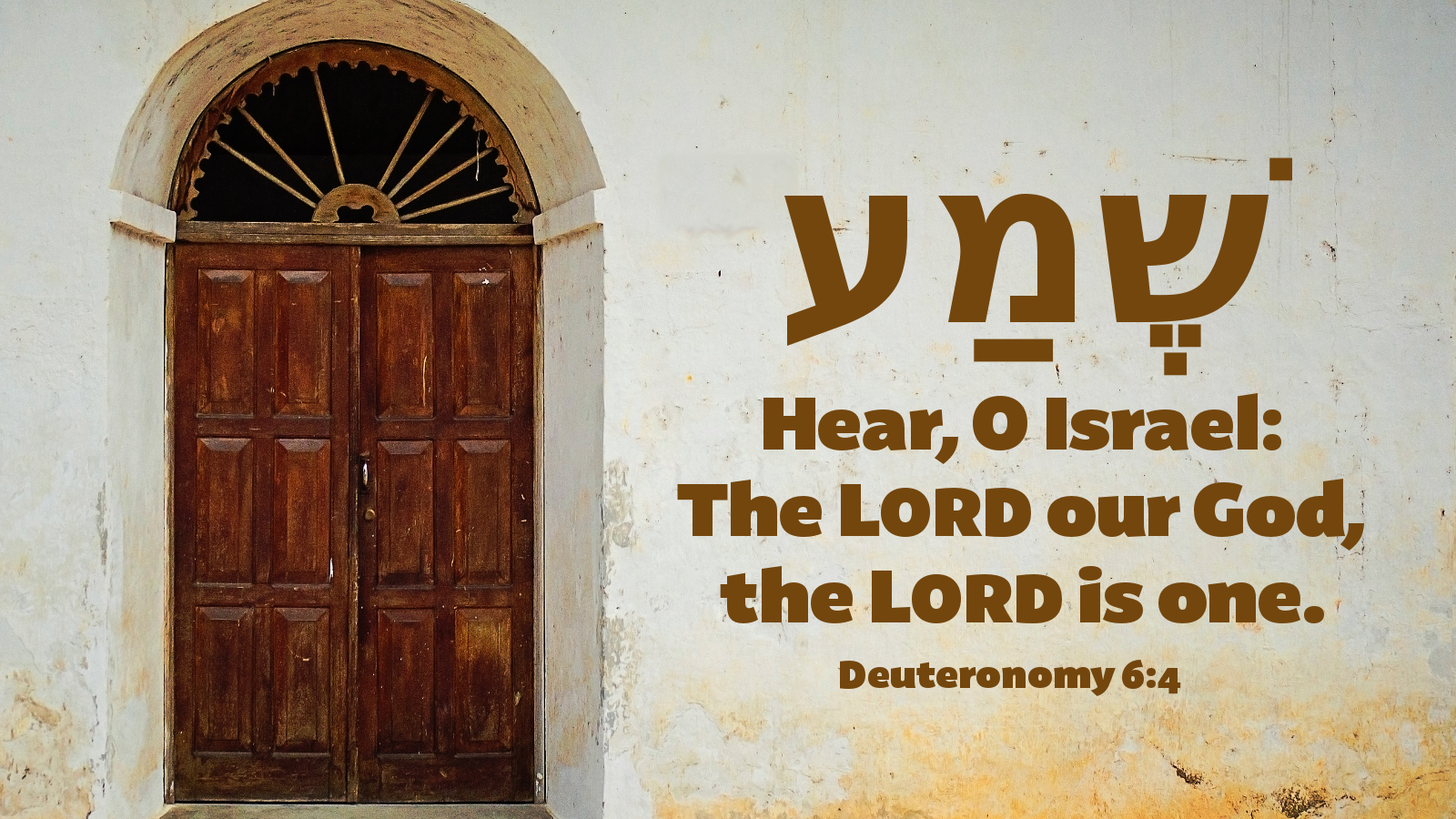 The Most Important Commandment

Friday of this past week, Paul Ryan, Speaker of the House of Representatives was one of many dignitaries invited to the Capital in Washington, DC, to speak in memory of Billy Graham who laid in repose there. He began his remarks by quoting Jesus’ answer to the scribe in today’s Gospel Lesson from Matthew.

Years ago, Susan and I were blessed with an invitation to a much smaller affair. We were invited into the home of a Jewish friend of our youngest daughter. Her rabbi was present to dedicate her family’s new house. Toward the end of the service, while we all stood in the living room, he nailed a Mezuzah to their doorframe. A Mezusah is a small metal cylinder that contains the Shema. The Shema is verses four and five in our Old Testament lesson which begin: “Hear, O Israel.”

Shema is the Hebrew word for “hear,” which we see at the beginning of that admonition: “Hear, O Israel.” Shema means hearing something in a way that results in obedience. In fact, shema may also be translated “obey.” Devout Jews begin and end their days reciting, “Hear, O Israel,” then continuing with this precise creed: “The Lord our God, the Lord is one.” The Shema is also the words that every synagogue service began with in the time of Jesus. They still do today.

Let us pray. Holy Father, you made it clear to your chosen people that you are the one true God who is worthy of our worship. Grant us grace and boldness to hear and obey, putting aside all those things that keep us from hearing your Word and knowing your will; through Jesus Christ, our Lord, who lives and reigns with you and the Holy Spirit, forever one God. Amen.

Synagogues developed as places to pray daily together, and means “a place of gathering” in the Greek. The idea was to not have to wait on a journey to Jerusalem to pray in the temple, but to be able to pray together every day in the synagogue.

Sadducaic Judaism revolved around the rituals of the temple. The Pharisees, on the other hand, would have found temple important and blessed but the day-to-day life of the synagogue would have been primary. With the destruction of the Second Temple in A.D. 70, the Sadducees disappeared along with the temple. The Essenes, another Jewish group had already departed to the Dead Sea community of Qumran, leaving the Pharisees as the sole proprietors of Judaism. Modern day Judaism comes from these Pharisees.

But in the time of Jesus, the Sadducees were the second largest religious group in Judea. In terms of group size, that would be akin to thinking of them in terms of the Southern Baptists, second only to the Catholic Church in America. The Sadducees were sizeable, uncompromising—a group to be reckoned with.

The name Sadducees might derive from the Hebrew word for “righteous.” We find that word in the name Melchizedek, a name you read in your daily Bible readings back on January 4th. You will read his name again on July 5th and December 18th in the books of Psalms and Hebrews. May you recall on those dates that Melchizedek is composed of two Hebrew words: melek meaning king, and sedek meaning righteous. So Melek-sedek or Melchizedek was the king of righteousness. It’s the second part of his name, sedek, which may be the basis for the Sadducees’ name since these Jews strictly kept the Law. They considered themselves more righteous than others.

They did not accept some of the beliefs of the scribes and Pharisees. For example, they did not look for the Messiah or believe in angels, spirits, or the resurrection.

It is the latter, the resurrection, which plays prominently in our Gospel lesson this morning. Some Sadducees had sought to trap Jesus with a question about the resurrection that they thought would show him to be a false prophet, since they imagined that however he answered, they could prove him wrong. This proved to not be the case.

Our Gospel reading begins mid-dispute. At that point, a scribe or interpreter of the Law, probably from the sect of the Pharisees which believed in the resurrection, saw that Jesus had wisely answered the Sadducees. He seems sincere in asking Jesus’ opinion about the greatest commandment. He doesn’t want to entrap the Rabbi; he seems instead, to value his opinion. “Teacher, which is the great commandment in the Law?”

Did you notice that Jesus added a word?

In his distillation of the Ten Commandments, Jesus names four things that make us human and that must be used in loving God: heart, soul, mind, and strength. But in Deuteronomy, Moses names three: heart, soul, and might. Did Jesus misquote the Bible?

Hardly. He does something for the benefit of his hearers, who had been influenced by Hellenism, an identification with Greco-Roman culture. In order to understand how Jesus helped these Hellenistic Jews understand the most important commandment, we need to know what version of the Bible Jesus used.

Was it the English Standard Version? Of course not. The ESV would not be published for another 2,000 years. So, it must have been the King James. Surely, Jesus used the KJV. No, again, for that so-called Authorized Version would only be less than 500 years closer to Jesus’s time. It wasn’t available to Jesus either. Perhaps the Latin Vulgate. No. It was translated about 400 years after Jesus.

But here in our Gospel lesson, in declaring the greatest commandment, Jesus seems to be drawing from both his Hebrew Torah training and the Greek Septuagint. His use of four words for how we are to love God, pull from both.

Remember that the Hebrew says to love the Lord your God with all your heart, soul, and might. The Greek Old Testament, the Septuagint that Jesus and the apostles used, renders the Hebrew as mind, soul, and strength. I think Jesus is combining the two, using the Greek understanding of “heart” as the mind, which would have been meaningful to the Hellenistic Jews who were listening to him. Yet he also knew that the Hebrew understanding of “heart” included the mind, but that it was more than mere intellect. He was making sure his hearers knew that God is to be loved with the entire person: heart and soul and mind and strength.

So, if the Lord is your one God, you do more than hear him. Whether it is with three or four words, you obey him with your whole self. As the Small Catechism teaches, you “fear, love, and trust God above all things.”

This is our daily creed.

This is our daily creed, as it was and is the Jews. For God is not the God of the Jews only. He is also the God of the Gentiles, since God is one. The one God, the God of Jews and Gentiles, desires all people to be saved, calling upon him in faith when they have heard his word. For faith comes by hearing and hearing through the word of Christ (Rom 10:17).

“Hear!” Obey by loving God with your whole being. This obedience is not just the doing of religious duties in the Law. For we are justified, made right with God, apart from works of the law. It is more than this; it is loving God through the law of faith.

As you pass through each day, may you be reminded to hear God in his Word, and lovingly obey him by believing with faith. Do not trust in a law of works, religious deeds, morality, or belonging to a particular religious group that you find more righteous than others: things you might boast about. Boast in the Lord who saves all who believe, Jew and Gentile alike, through Jesus Christ.

The Mazuzah that I mentioned earlier is meant to remind Jewish families of more than what they believe; it reminds them of who they believe. It is a constant calling back to faith as they walk in and out of their homes.

Faith is our Mazusah, a little scroll, nailed to our hearts…

Faith is our Mazusah, a little scroll, nailed to our hearts and souls, our minds and strength, reminding us that God is the one God, and that we are to love him with every bit of who we are. In so doing, we cannot help but love our neighbor, Jew or Gentile, as ourselves. There is no commandment greater than these.

May you fear, love, and trust in God, walking in his ways through faith in Jesus the Lord. Amen.